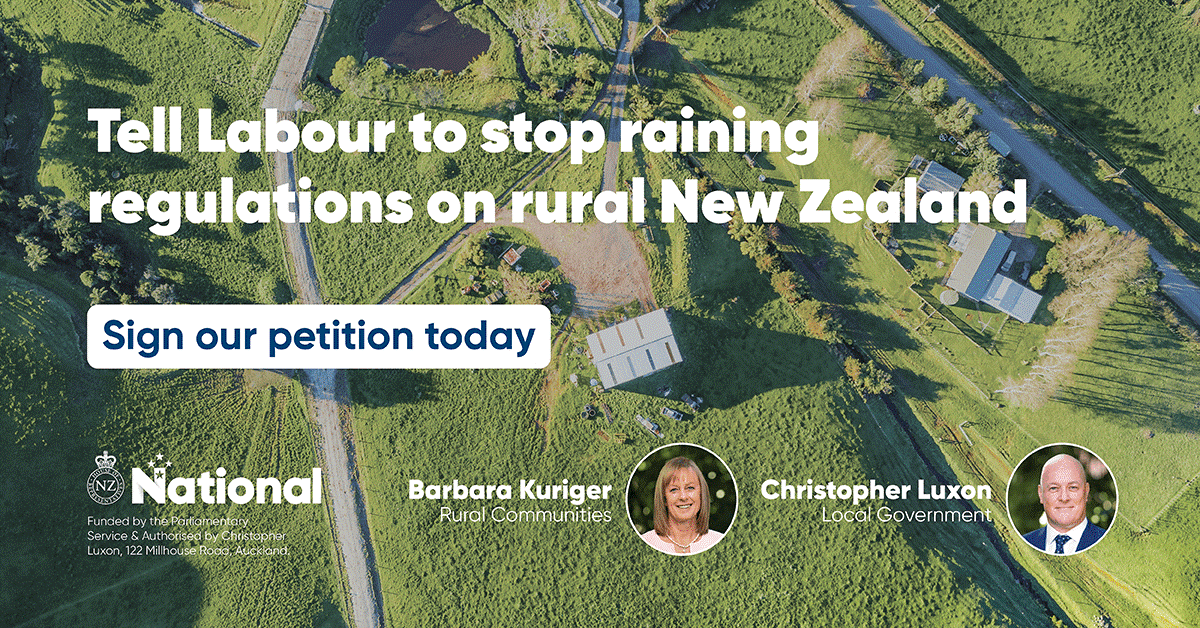 “As it stands, the Water Services Bill would expose tens of thousands of rural water schemes to disproportionate bureaucracy, just so they can continue supplying water between, for example, a farmhouse, a dairy shed and workers’ quarters,” Mr Luxon says.

“Despite warnings from National and major sector bodies at select committee, the bill will require Taumata Arowai to track down and register around 70,000 farm supply arrangements, each of which will need to write safety and risk management plans.

“We’re deeply concerned that the compliance costs and administrative burden this will create for farmers will be significant, while any supposed safety gains will be tiny.

“Rural water schemes already have an excellent track record when it comes to safety and quality, and they very rarely produce risks to human health. Public health incidents more commonly involve council-run water supplies, as in Havelock North and Otago.

“Labour has put farmers up to their eyeballs in costs, rules and regulations – from freshwater, to slope rules, to SNAs, to high country tenure review, to the Ute Tax.”

By dumping yet another onerous regulatory burden on rural communities, Labour is effectively saying it doesn’t care about them, Ms Kuriger says.

“National will oppose the Water Services Bill at second reading. We cannot support a bill that creates yet another unnecessary hoop for farmers to jump through.

“Instead, we will propose an amendment to exempt small water suppliers that supply fewer than 30 endpoint users – which will capture not only rural water schemes, but marae, subdivision water schemes and holiday home owners sharing a bore.

“We hope our practical amendment will attract the support of other parties.

“We will also need an outpouring of public support, which is why National is launching a petition against the bill as it currently stands and calling on the Government to exempt small water suppliers.”

“We’re asking New Zealanders to sign our petition and share it far and wide, and tell Labour to stop raining regulations on our rural communities,” Ms Kuriger and Mr Luxon say.

“National is the party for rural New Zealand, and we’re listening to farmers who are at breaking point.”