I’ve hosted quite a few National MP visitors in Taranaki/King Country during the past month. First up was Leader Christopher Luxon on August 11.

After picking him up at Hamilton Airport, we stopped in to see the NZ National Fieldays Society team at their Mystery Creek HQ. We talked about logistics, roading infrastructure around Mystery Creek, the importance of Fieldays as New Zealand’s biggest annual agriculture event, its international appeal and its future.
We spent the rest of the day talking with a really good mix of people across all kinds of business and industries. First up was the legal team at Edmonds Judd, then lunch with Te Awamutu Chamber of Commerce members.
We met with Te Awamutu Primary School students, held a media stand up in the Rose Gardens, then caught up with a group of farmers at the Ngāhinapōuri home of Dairy NZ chair Jim van der Poel. Their concerns and issues mirrored those of the rest of the ag sector. We ended the day catching up with local National Party members at a social event in Te Awamutu. 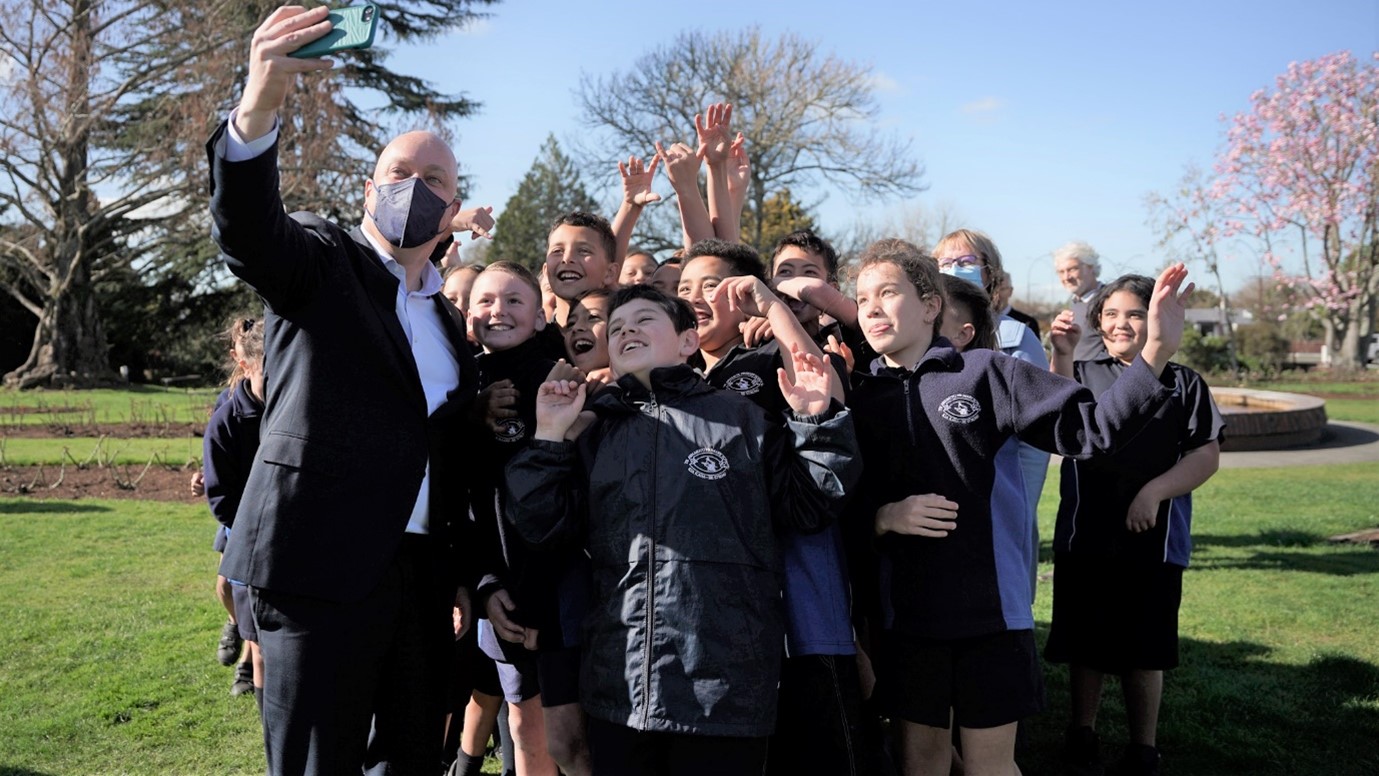 Selfie with Te Awamutu Primary students in Te Awamutu’s Rose Gardens before heading off to chat with local farmers.

The next morning, I was back in New Plymouth to welcome our National MP infrastructure and transport team of Simeon Brown, Scott Simpson and Matt Doocey.

We had breakfast with Chamber of Commerce members, then visited Whitakers Civil Engineering. This company was founded in 1980 and involved in the development of oil and gas sites across Taranaki.

Since then Whitakers has steadily grown and gained a reputation for delivering complex engineering projects. It employs 100 people with an amazing range of skills from carpentry and drainlaying to heavy machine operators.

We followed that with a visit to Symons Group. These heavy haulers specialise in transport, energy services and waste remediation. Founder Graham Symons started the business in a small farm shed with one truck in 1984. They now have clients all over the country and the world.

Simeon, our Transport portfolio holder, took a ride in one of the big trucks to see the state of Taranaki roads from an elevated seat. The afternoon was spent in Stratford, meeting with local mayors and councillors to discuss infrastructure and roading issues. 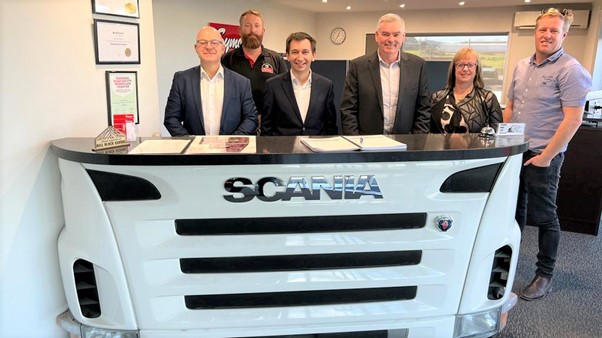 Matt, Simeon, Scott and I with Dean Eggers (left) and Murray Symons behind the company’s brilliant reception counter. Visitors are left with no doubt as to what these guys do for a living.

Nicola Grigg, our Rural Communities spokesperson, will be visiting on Monday September 19 and together we’re holding a public meeting at the Urenui Hall from 3.30-5.30pm so all are welcome. Come along and catch up with us. 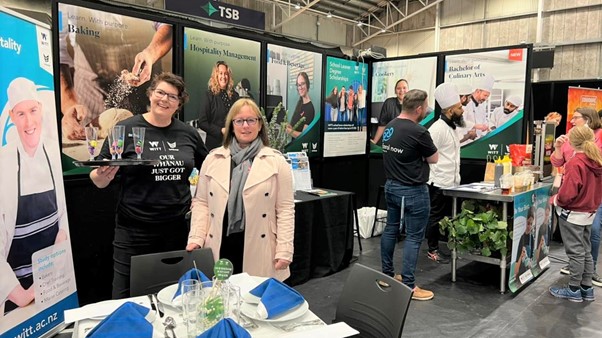 WITT was one of the many tertiary providers at the expo with this display concentrating  on the career opportunities in hospitality. It’s a sector crying out for staff with hundreds of jobs available.

Taranaki Careers Expo, August 15-16, New Plymouth — Job options across many industries were on display at this two-day event. At a time when employers are desperate for staff, it was heartening to see the possibilities available. Several schools went through the expo and tertiary education providers were also on hand to offer information.

Three Waters Select Committee hearings, August 16, Hamilton — Attending this day of the hearings confirmed what all of us already know, Three Waters is no solution to New Zealand’s water infrastructure. Most of the people presenting were from smaller council regions. They feared their areas would miss out, once their water assets were swallowed up by one of the four entities being created to manage them. Many submitters spoke about huge amount of money being spent and bureaucratic layers being created as the Government tries make a one-size-fits all approach work. While everyone acknowledged some things needed to be done in some catchment areas of NZ, they also said there were far simpler ways of helping council address their individual problems and needs.

Nelson visit, Richmond/Central areas, August 18 — My heart went out to the people of the upper South Island, while in Nelson. There to speak at a party luncheon and visit Proper Crisp and Goldpine businesses, I was very aware of the flooding and damage going on in this part of the country. Losses of homes, land, animals, cattle feed, machinery, infrastructure and other essentials too numerous to mention, mean these communities and others around the country will feel the impacts of unprecedented rainfall for a long time.

Bluegreens Forum, August 20, Auckland  — Our National Party advisory group on environmental issues was finally able to get together on August 20, after two years of difficulties thanks to COVID.

A range of people spoke including the Climate Change Commission chair Rod Carr. It was really valuable for the forum to spend time with him and get a good grip on what is being proposed, rather than trying to read the 400pg tome the commission released or skewed reports through the media. We found a lot of common ground in what he said. There was a really good presentation on preserving our oceans and the ‘blue’ economy of the sea.

We also looked at the ‘green aspects’ of our policies and building those into everything we do. As Leader Christopher Luxon says: I want to bend the curve on net emissions as quickly as possible in government. Not by planting even more trees, but by putting all options on the table, investing in new technologies, and doing what works.” 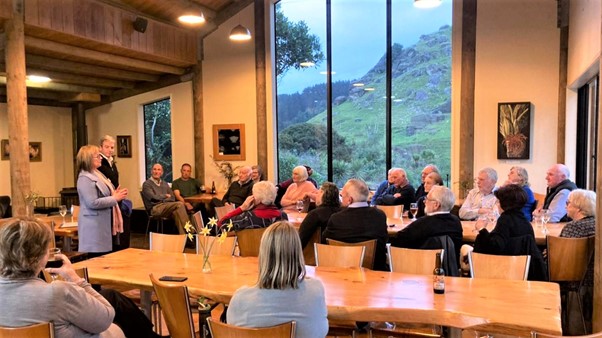 With Andrew at the Politics and Pizza event on August 26.

Politics & Pizza, August 26, Waikāretu — National MP for Port Waikato Andrew Bayly and I joined a group of folk from around his region to talk politics. It was a great night discussing all sorts of issues and enjoying Nikau Café’s pizza.

75th anniversary, Waipā-King Country Rural Women, August 27, Roto-o Rangi — I had such a momentous day catching up with these women to mark 75 years. It was a case of third time lucky to celebrate this milestone event thanks to COVID delays. There were about 70 ladies present across a range of ages, some of them who had been members since its inception in 1946.

We talked about all sorts of things including the days of pounds, shillings and pence, and using sixpence, something I remember using as a child. A book written by these women would be amazing. Some of them would need their own chapter though, to include the wisdom they hold. 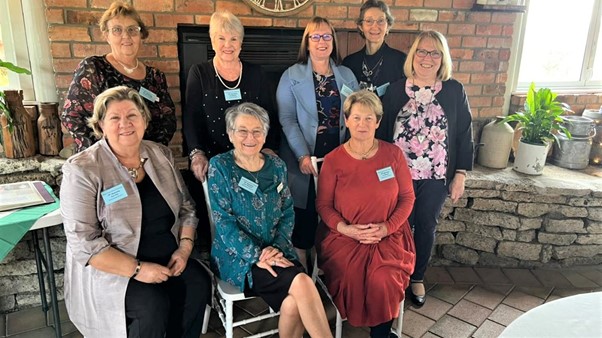 Behind every great 75th anniversary of the Waipā-King Country Rural Women branch are the organisers.

King Country Rivercare, August 29, Piopio — For me, it’s always so great to talk to rural people. Their views are so refreshing and their assessment of some of the issues plaguing their communities right now, enlightening. Such was the case when talking to KC Rivercare members. This is a boots-on group which has done a lot of work in terms of local water quality, riparian planting and much more.

They host workshops to help farmers with their environmental planning, compliance matters, carbon, grazing rules, chemical handling, to name but a few, and I have watched their progress with great interest.

As volunteers, they do practical things to improve the environment around them and helping many others to go with them. They are quite inspirational.

What wasn’t surprising, was to hear they are suffering from the overwhelming weight of red tape and administrative burden. Bring accountable when required is one thing but having to supply constant data and ticking boxes for government reports is onerous. So we had a really good talk about doing things from ground up rather than the top down.

I really enjoy getting out and meeting people running all sorts of businesses in some very small places. Such is the case with Leonie (below) and Neville Walker at Nevalea Alpacas in Ōngarue. They have more than 1000 alpacas, make their own jerseys, hats and yarn from the wool, then sell them online. 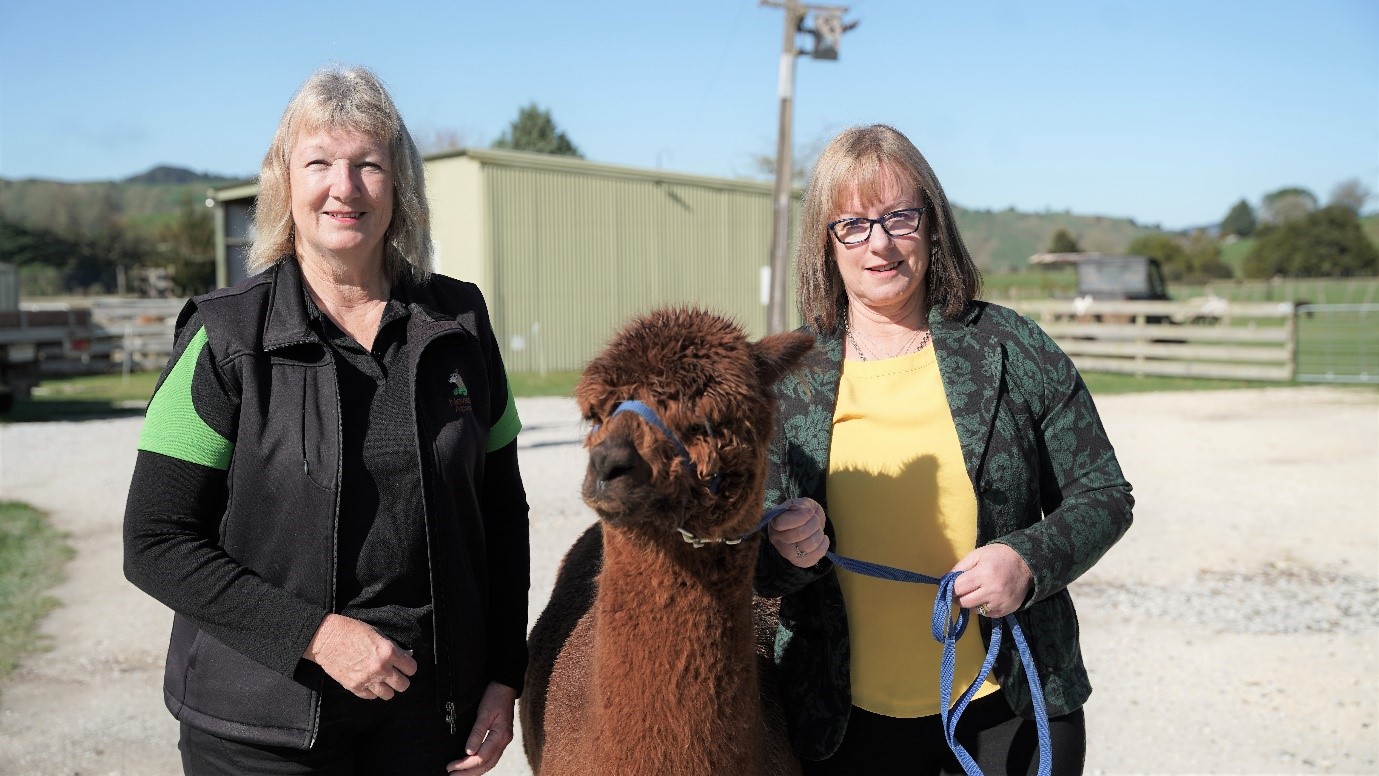 It is a privilege to serve you as an MP. Thank you for staying connected with me, it’s very much appreciated.