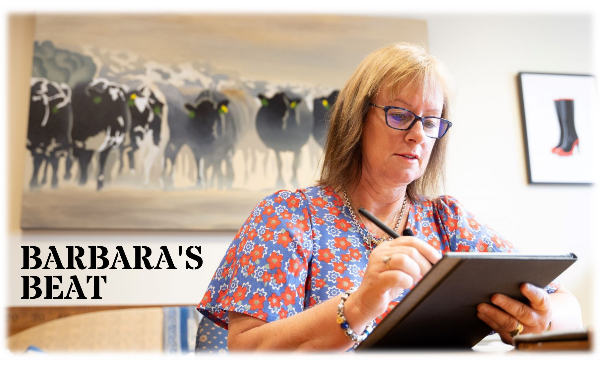 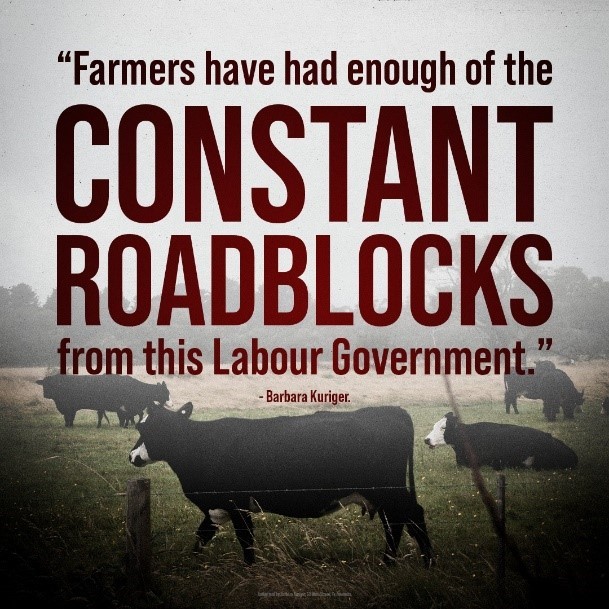 Nothing gives me better grasp of how rural New Zealand is doing than being out talking to farmers. Banks Peninsula was hit by severe flooding in December. The impacts on local farmers were bad during such an important time of the year.
Fast forward to today, they're feeling forgotten and are at their wit's end. The local MP is also nowhere to be seen.

It makes me sad to see, as it's places like this that are the backbone of New Zealand. Fellow MP Nicola Grigg and I visited them on March 22, to hear their stories and to see how the clean-up is coming along. I know Nicola will be a staunch voice for them and I wish them all the best. 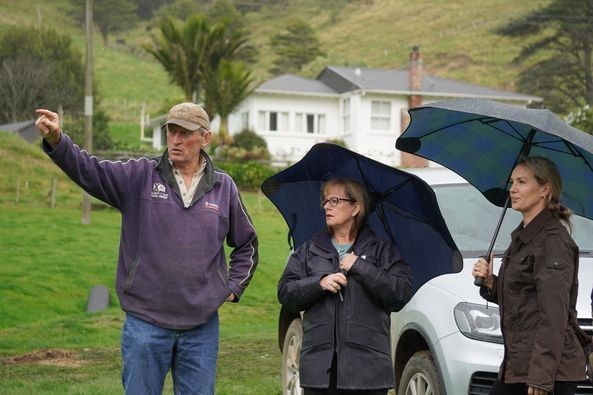 Selwyn MP Nicola Grigg (right) and I visited Banks Peninsula farmers hit by severe flooding in December. They were badly impacted by it  and are feeling forgotten by the Government.

As this column goes together, my thoughts are with the people of Tairawhiti — the East Coast. Flooding has ravaged the region, especially areas north of Gisborne, Tolaga Bay, Tokomaru Bay, Anaura Bay to the top of the East Cape.

State highways and bridges are in a horrendous state, and damage to housing, education facilities, community buildings and CBDs, will take months and millions of dollars to repair.

It is harvest time in the region, so my thoughts are all the food  and wine producers suffering the devastation of the crops and fruit, as well as farmers seeing the destruction of infrastructure like fences, as water and silt deposits sweep over productive lands. The state of emergency declaration will help with government assistance and insurance.

Our ag team headed to Pāmu’s organic farm near Taupo on March 24. Pāmu is the brand name for Landcorp Farming Ltd which has a portfolio of farms nationwide. The vision of this group is to become the premium supplier of meat, milk and fibre for niche markers globally.

It was definitely a hands-on visit, as the farm milks deer, sheep as well as dairy, and we were happy to help out. 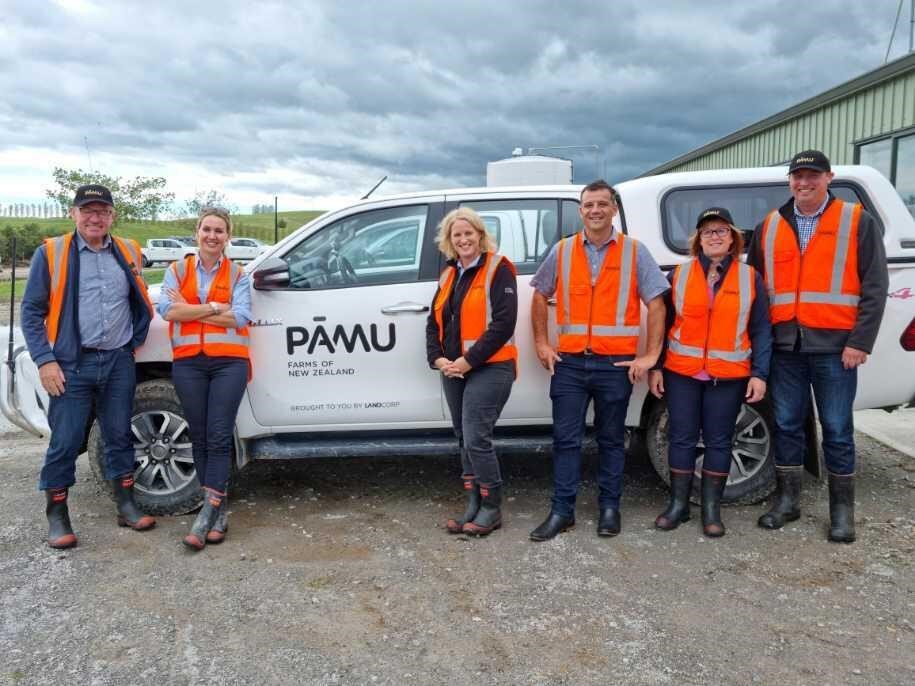 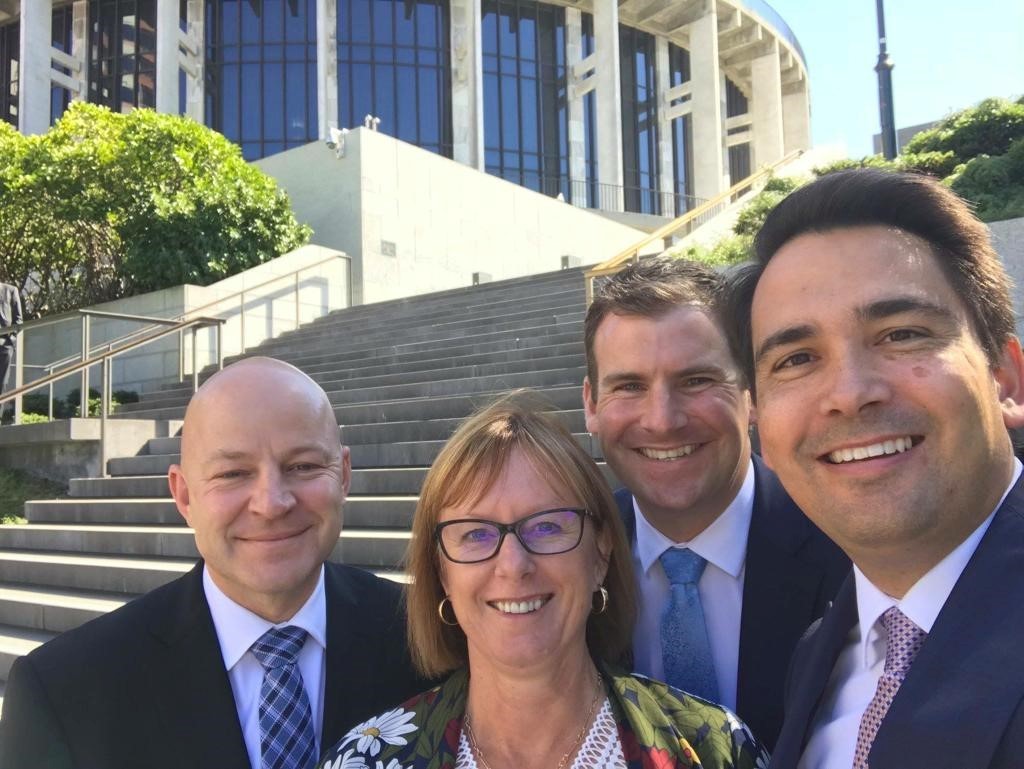 All the best Simon! We are pictured with Matt Doocey (left) and Tim van de Molen (rear).

All the very best to Simon Bridges as he leaves Parliament for new endeavours.

It’s been such a pleasure working with him, especially as Senior Whip, when he was Leader. Here’s to the next chapter with Natalie and your children Emlyn, Harry and Jemima!

I also want to congratulate Nicola Willis in her new role as our Finance Spokesperson. This is an onerous task against a Government which enjoys taxing then spending its citizens’ hard earned cash.

I’ve also taken on the acting role of Horticulture Spokesperson, while my colleague Tim van de Molen is out of action. Tim fell off a platform in late February, suffering multiple fractures, so will be on leave until he recovers and returns to us. Get well soon Tim!

Meanwhile our fruit and veggie growers are really suffering as red tape and a desperate need for staff across all sorts of jobs, hinders their businesses.

Food is now outrageously expensive thanks to fuel and compliance costs, plus the additional costs added by supermarkets and other retail outlets.

My recent visit to Hamilton Boys' High School was enlightening. These future leaders of New Zealand showed great interest in both farming and farming-related industries - subjects very close to my heart!

But not only did I visit Hamilton Boys’ High School, I also visited new principal of Te Kūiti High School Gareth Williams, and Rakesh Govind, who has taken the helm at Piopio College. Our discussions centred around their roles, the difficulties for educators under COVID restrictions and the work being done to get students into jobs locally. I’m always happy to visit schools within my electorate. If you’d like me to call in, send me an invitation — [email protected] 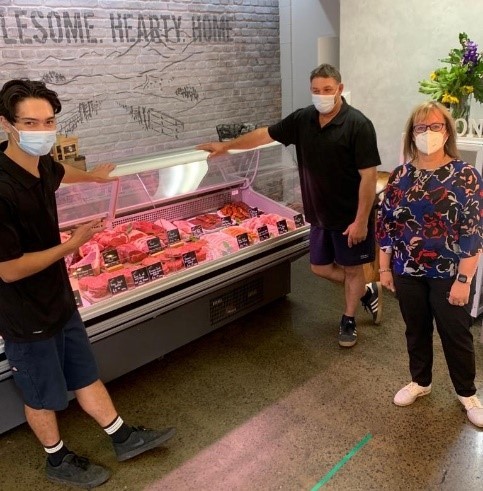 Expleo owner Shawn Nicholas (right) and his son William. This Te Awamutu business receives rave reviews from customers all over the country.

In the last issue of Barbara’s Beat, I featured a number of food producers in the Waipā region. Since then I have visited Te Awamutu butchery and delicatessen Expleo. Owned by Shawn and Nells Nicholas, this family business supplies a gourmet selection of prime meats, chicken, cheeses and vegetables as well. They sell instore and online, around the country and receive rave reviews for their service. For more visit — www.expleo.co.nz or find them on Facebook.

Locally produced food is a great interest of mine, so if you know of something I need to visit let me know.

The opportunity to learn more is always something I relish. Such was the case on a recent trip to Waimakariri with fellow MP Matt Doocey on March 4. A visit to the Landcare Trust was a great opportunity to learn more about the seed industry and a great example of farmers working together to improve their land. Working together to enhance the environments in their catchments is the best start to find solutions, rather than sending unworkable ones to them from Wellington. 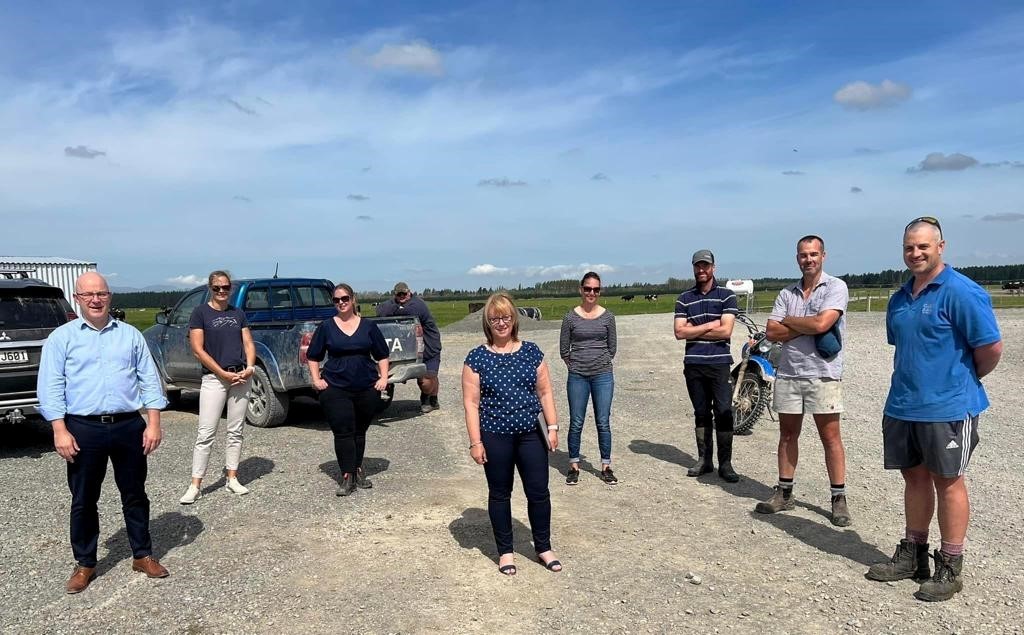 Local MP Matt Doocey (left) and I visited Landcare Trust farmers on March 4. It was a great opportunity to learn more about the seed industry.

NEWS FROM ME TO YOU

By email — receive every press release and opinion piece, unedited, as I send them out — click on the blue ‘subscribe here’ button below.

Online — see my latest news and other issues of Barbara’s Beat on my National web page — https://barbarakuriger.national.org.nz/news

Thank you for keeping in touch with me, it's very much appreciated. I regard it a privilege to serve you as an MP.